Skip to Main Content?
Let's get this experience started
Sign up is super easy. Let's start by filling out this form.
Register With EmailRegister With FacebookRegister With GoogleRegister With Github
Already a member? Log In
Log In With EmailLog In With FacebookLog In With GoogleLog In With Github
Create an Account
Enrollment Options
Enroll In Course
Additional Information Required
enroll
You can also start immediately after joining!
This exclusive course is part of the program:
Output Teaches Creating Audio Plugins with C++ and JUCE
Join Program
Go at your own pace
4 Sessions / 10 hours of work per session
Price
Program ($350 USD)
Certificate
Included w/ premium membership ($20/month)
Program
Output Teaches Creating Audio Plugins with C++ and JUCE
Skill Level
Expert
Video Transcripts
English
Topics
Audio Plugins, JUCE Framework, Audio Plugin Architecture, GUI & DSP Programming

In this course, musician and Output software engineer Bruce Dawson expands on the fundamental concepts presented in the Intro to Audio Development course. We’ll expand on our understanding of fundamental Digital Signal Processing (DSP) design to create portable reusable DSP algorithms, as well as the user interface design introduced during the first course. Additionally, we’ll cover the basics of creating professional-grade reusable management systems, and take the time to make our work-in-progress project look and feel like a finished product.

What students are saying:

" Thank you very much for everything! This is the first formal JUCE course I have ever seen and taking it cleared up many things. " 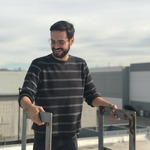 Bruce Dawson is currently a software engineer for Output, Inc., based in Los Angeles, California. He received an interdisciplinary Masters of Fine Arts Degree from California Institute of the Arts in 2015 combining Computer Science and Music Theory with a focus on Computer-Aided Algorithmic Composition. Bruce graduated with a Bachelor of Science in Computer Science with a focus on Information Security from DeVry University in 2011.

Bruce was the lead software engineer on Output's first endeavor into C++ Audio Plug-in's with, "MOVEMENT," and today is involved with Output's current direction in music technology applications. Additionally, his music project, "Synchronometry," focuses on the application of Computer-Aided Algorithmic Composition techniques within the context of electronic music production. Bruce's work has been featured on MusicRadar, MusicTech, Computer Music Awards, ProducerSpot, FactMag, SoundOnSound, and more.

If a student signs up for the Creating Audio Plugins With C++ program, it is recommended that these courses are taken sequentially.