This is a perfect course for anyone looking to learn the basics of Western music theory.

You will learn to read and write western music notation through simple and easy to follow interactive lessons, and improve your ability to recognise pitch and rhythms by ear through carefully crafted exercises.

By the end of this course, you will develop a solid foundation in western music theory fundamentals and be ready to begin advanced music studies.

Be Rewarded for your Achievements
You'll love earning badges as you pick up new skills.

Easily Shareable
Don't be shy. Display your badges on your profile and show the world what you've learned!

Recognise aurally and visually different pitches and rhythms in a musical context. Be able to transcribe simple notation, recognise intervals and instrument sounds. Create major scales using a formula, learn about time signatures and be able to sub-divide a beat.

Engage with your peers & participate in shared forums

Engage constructively with peers online and express your own opinions or thoughts. Like, comment or give feedback on your peers' work to earn participation grades. Create a community and learn from one-another. 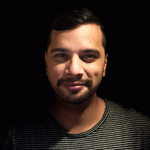 I'm a drummer and percussion player from Calcutta, India, currently based in Bombay. I attended the London Centre of Contemporary Music, where I studied an honours degree in jazz music performance under the tutelage of Richard Brook and Pete Cater. I have also studied under renowned American educators John Riley and Dave Dicenso.

In my capacity as the associate dean at TSM I lead curriculum development and teaching quality, I also enjoy teaching drums, music theory and ensemble techniques. I enjoy playing Swing, Afro-Cuban and various other styles of music.

This course features live interaction with the course faculty during pre-scheduled times, where you can ask questions, get feedback on your progress and even talk about your musical aspirations.

— Credit Eligible — Micro-course
— Credit Eligible
Back To Top
Certificates
Whenever you complete a course as a premium member, you can earn a verified Certificate of Accomplishment .
These certificates are shareable proof that you completed an online course and are a great way to help you land that new job or promotion, apply to college, or simply share your achievements with the world.
Learn More
Enroll For College Credit
Kadenze has partnered with Kadenze Academy to offer this course for 0 college credits.*
*Upon completion, this rigorous college-level course will provide credits that are recognized and transferable from the partnering institution. Credit as workload and transferability is defined by the granting institution. Participation in these courses does not represent an acceptance decision or admission from the institution that offers them.
Learn More
Micro-courses
This course is a Micro-course. Taught by industry professionals and thought leaders, Micro-courses are shorter, bite-sized courses that bring you up to speed in the hottest topics.
Learn More