TensorFlow logo and any related marks are trademarks of Google Inc.

This course extends the material from the first course on Creative Applications of Deep Learning, providing an updated landscape on the state of the art techniques in recurrent neural networks. We begin by recapping what we've done up until now and show how to extend our practice to the cloud where we can make use of much better hardware including state-of-the- art GPU clusters. We'll also see how the models we train can be deployed for production environments. The techniques learned here will give us a much stronger basis for developing even more advanced algorithms in the final course of the program. We then move on to some state-of-the-art developments in Deep Learning, including adding recurrent networks to a variational autoencoder in order to learn where to look and write. We also look at how to use neural networks to model parameterized distributions using a mixture density network. Finally, we look at a recent development in Generative Adversarial Networks capable of learning how to translate unpaired image collections so that each collection looks like the other one. Along the way, we develop a firm understanding in theory and code about some of the components in each of these architectures that make them possible. 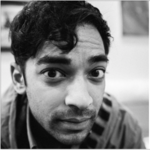 Parag K. MITAL (US) is an artist and interdisciplinary researcher obsessed with the nature of information, representation, and attention. Using film, eye-tracking, EEG, and fMRI recordings, he has worked on computational models of audiovisual perception from the perspective of both robots and humans, often revealing the disjunct between the two, through generative film experiences, augmented reality hallucinations, and expressive control of large audiovisual corpora. Through this process, he balances his scientific and arts practice, with both reflecting on each other: the science driving the theories, and the artwork re-defining the questions asked within the research. His work has been exhibited internationally including the Prix Ars Electronica, ACM Multimedia, Victoria & Albert Museum, London’s Science Museum, Oberhausen Short Film Festival, and the British Film Institute, and featured in FastCompany, BBC, NYTimes, CreativeApplications.Net, and CreateDigitalMotion.

A short guide is provided here: https://github.com/pkmital/CADL to help with the installation of each of these components:

There is also an introductory session for those less familiar with python: https://github.com/pkmital/CADL/blob/master/session-0/session-0.ipynb

Some knowledge of basic python programming is assumed, including how to start a python session, working with jupyter (ipython) notebook (for homework submissions), numpy basics including how to manipulate arrays and images, how to draw images with matplotlib, and how to work with files using the os package. You should also have completed the first course in the CADL program before taking this second course.

— Credit Eligible — Micro-course
— Credit Eligible
Back To Top
Certificates
Whenever you complete a course as a premium member, you can earn a verified Certificate of Accomplishment .
This course is also part of the Program: Creative Applications of Deep Learning with TensorFlow, and you'll earn a verified Specialist Certificate after successfully completing the Program.
These certificates are shareable proof that you completed an online course and are a great way to help you land that new job or promotion, apply to college, or simply share your achievements with the world.
Learn More
Programs
This course is part of the program: Creative Applications of Deep Learning with TensorFlow. Programs unlock exclusive content (courses) that helps you develop a deep understanding of your subject.
From your first course to your final summative assessment, our thoughtfully curated Program curriculum enables you to demonstrate your newly acquired skills are especially suited for those looking to advance their careers, prepare for their studies, or become an expert in a given subject.
Learn More