Software engineering and asset production are the means of digital game development, but the end is an intentional experience. Digital game design is the process of creating, implementing and iteratively refining that experience.

This hands-on course will demonstrate the practice of digital game design and development using Perlenspiel, a cloud-based, abstract microgame engine programmed in JavaScript. Lectures and code demos will familiarize you with Perlenspiel’s event-driven architecture and key aspects of its application programming interface (API).

This course is in adaptive mode and starts Oct 23, 2018. Learn more about adaptive courses here.

The Perlenspiel Gameclavier
Use the Right Tools
Events and Commands: The Basics
Instructors And Guests 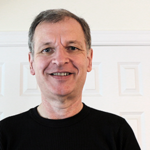 Brian Moriarty built his first computer in the fifth grade. This early experience with digital electronics led him to persue a BA in English at Southeastern Massachusetts University (now UMass Dartmouth), where he graduated in 1978. His professional career began later that year, when he sold TRS-80 micros at a Radio Shack store in downtown Worcester, Massachusetts. After working for a few years as a technical writer at Bose Corporation, he became Technical Editor at ANALOG Computing, the first and largest magazine dedicated to Atari home computer systems. His first published games, Adventure in the 5th Dimension (1983) and Crash Dive! (1984), appeared in the pages of ANALOG.

In 1984 he joined legendary text adventure company Infocom, where he authored three award-winning interactive fiction titles, Wishbringer (1985), Trinity (1986) and Beyond Zork (1987). He also contributed to Douglas Adams’ Bureaucracy (1987). His first graphic adventure game, Loom, was published in 1990 by Lucasfilm Gamesto wide critical acclaim. He collaborated with Ron Cobb on the design of Loadstar: The Legend of Tully Bodine (Rocket Science, 1994), and is enigmatically credited with “Additional Additional Story” for Steven Spielberg’s The Dig (LucasArts, 1995).

In July 2009, he was appointed Professor of Practice in Game Design in the Interactive Media and Game Development program at Worcester Polytech, thus returning to the city where his career began.

Prior Knowledge: This program is at a beginner level. However, prior familiarity with digital games and the basic principles and tools of software engineering are recommended.

Equipment: Computer with broadband Internet access and a updated web browser, preferably Chrome or Firefox. Installation privileges may be required if a student wishes to employ an integrated development environment (IDE) for project work.

Please note: Taking part in a Kadenze course as a Premium Member does not affirm that the learner has been enrolled or accepted for enrollment by Worcester Polytechnic Institute.

If a student signs up for the Digital Game Design: Getting Started with Perlenspiel program, it is recommended that these courses are taken sequentially.

— Credit Eligible — Micro-course
— Credit Eligible
Back To Top
Certificates
Whenever you complete a course as a premium member, you can earn a verified Certificate of Accomplishment .
This course is also part of the Program: Digital Game Design: Getting Started with Perlenspiel, and you'll earn a verified Specialist Certificate after successfully completing the Program.
These certificates are shareable proof that you completed an online course and are a great way to help you land that new job or promotion, apply to college, or simply share your achievements with the world.
Learn More
Programs
This course is part of the program: Digital Game Design: Getting Started with Perlenspiel. Programs unlock exclusive content (courses) that helps you develop a deep understanding of your subject.
From your first course to your final summative assessment, our thoughtfully curated Program curriculum enables you to demonstrate your newly acquired skills are especially suited for those looking to advance their careers, prepare for their studies, or become an expert in a given subject.
Learn More