In Guitar for Beginners, you'll learn an easy approach to get you playing quickly, through a combination of exploring the instrument, performance technique, and basic music theory.

At the end of this course, students will understand the structure, parts, and accessories of the instrument, in addition to an understanding of its basic maintenance. Electric guitar players will learn the operation of their instrument along with basic options for amplification, effect pedals, and sounds. Students will also learn to develop correct technique and apply theory concepts to their playing. They will have the foundational knowledge necessary to pursue most intermediate guitar courses.

Session 1: The Basics (May 31, 2022)
In this first session, we will focus on how to choose the right guitar for you and what accessories are essential for any guitar player. You’ll learn the parts of the guitar and get you comfortable with your instrument. You’ll also learn how to play your first two chords: A minor and E major.
6 lessons
1. Choosing the Right Guitar: Acoustic or Electric
2. Choosing the Right Guitar: Right Handed or Left Handed
3. The Essential Accessories for Your Guitar
4. The Parts of the Guitar
5. How to Read Chord Diagrams and Fretboard Maps
6. Playing an A Minor and E Major Chord
Session 2: Fundamental Guitar Skills (June 7, 2022)
In this lesson, you will learn how to tune and you will start playing your instrument from the ground up! Be patient and remember: focus on being accurate and play in consistent time with your metronome. These things are far more important than playing with speed.
7 lessons
1. String Names and Numbers
2. Tuning Your Guitar with a Tuner
3. Tuning Your Guitar by Matching
4. Tuning Your Guitar with Harmonics
5. Picking Techniques
6. Finger Picking
7. Strumming the Guitar
Session 3: The Twelve Half Steps and Basic Notation (June 14, 2022)
While you don’t need to be an expert on music theory to play guitar, it is important to know the basic building blocks of music. With this understanding, music will no longer be shrouded in mystery or complexity. This lesson presents fundamental musical ideas in a fun, non-intimidating way.
4 lessons
1. The Twelve Frets and Twelve Half Steps
2. Notes on the Fretboard
3. Rhythm Basics
4. Music Notation and Tablature
Session 4: Scales: Construction and Fingerings (June 21, 2022)
In this lesson, you will dig into scales. Don’t be intimidated. Some of you may have heard of, or practiced, scales. It might have been during piano lessons. Most likely it wasn’t very exciting for you. Hopefully you'll find the approach to scales in lesson 4 much easier and even fun.
6 lessons
1. Position Playing
2. Playing the Chromatic Scale on a Single String
3. Playing the Chromatic Scale in First Position
4. Playing the Chromatic Scale in Other Positions
5. Playing the Major Scale - Part 1
6. Playing the Major Scale - Part 2
Session 5: Chords: Building Easy Triads and Power Chords (June 28, 2022)
In this lesson, you will use all of the skills you’ve gained from the previous lessons to build the foundation of harmony. You will play certain scale notes at the same time to create chords. Let's look at why chords sound like they do, how to build them, how to easily play chords in open position, and how to play chords that you can move all around the neck.
6 lessons
1. Major Triad Chords
2. Minor Triad Chords
3. Barre Chords
4. Power Chords
5. Reading Chord Charts
6. Playing Chords
Session 6: Putting It All Together (July 5, 2022)
Now that you have the "science" of the guitar in your fingers, you will learn a couple of songs. You will do this by using melody (from the scales) and harmony (from the chords) we have learned. You will also learn an essential scale for playing melodies and soloing.
7 lessons
1. How to Read Chord Charts
2. What is the Pentatonic Scale?
3. Soloing with the Pentatonic Scale
4. Essential Electric Guitar Effects
5. Playing a Pentatonic Song: Blue Guitar Blues
6. Playing A Song: JP Lullaby
7. Course Review
Read More Read Less
Show off your Certificate of Accomplishment

Verify Your Achievements
Whenever you complete a course as a premium member, you can earn a verified Certificate of Accomplishment. These certificates are proof that you completed an online course on our platform.

Easily Shareable
Using its unique link, you can share your certificate with everyone from future employers and schools, to friends, family, and colleagues. It's the perfect tool to help you land that new job or promotion, apply to college, or simply share your achievements with the world.

Fundamentals of the Guitar

Identify the parts of a guitar and important guitar accessories and describe their function.

Read chord block diagrams, fretboard maps, tablature, and music notation and translate them into the corresponding chords and notes on the guitar neck.

Read and play through a song in tempo using a lead sheet. 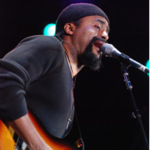 Thaddeus Hogarth is an associate professor in the Guitar department at Berklee College of Music. A two-time winner of the Independent Music Award for R&B/Blues, Thaddeus has been a prominent guitar player and singer-songwriter on the music scene since 1988, when he graduated from Berklee. He leads his own group, the Thaddeus Hogarth Band, featuring David Buda on bass, Joey Scrima on drums, and David Sparr on keyboards. Thaddeus has shared the bill or stage with such legends as Tower of Power, Average White Band, Ernie Isley, James Montgomery, Fred Wesley, Eric Gales, and Johnny Winter. His work also includes collaboration with the reggae legend and Grammy nominee, Sister Carol. He has released four solo CDs, a live concert DVD, and an instructional book. Thaddeus authored and currently teaches the course Funk/Rock and R&B Guitar Soloing for, the online continuing education division of Berklee College of Music, Berklee Online.

Please note: Taking part in a Kadenze course as a Premium Member does not affirm that the learner has been enrolled or accepted for enrollment by Berklee.